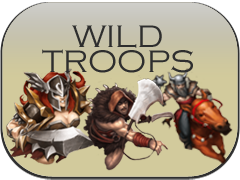 Wild Troops are the newest addition of Troops to Game of War. They have a rather barbaric and tribal-like theme. Unlike both Troops and Strategic Troops, the Tier 1 Wild Troops aren't unlocked after the Tutorial with Athena, but are only accessible after completing the Wild Combat research. Doing so can be done with an Academy lv. 1, but they require quite a lot of resources to unlock (Some over 5 million) and require the Troop Training Capacity III research, which has a default timer of 107 days. Wild Troops are similar to Strategic Troops in the way they work in combat. Each Troop type is very strong against one other type, but they are weaker to all other types of Troops, and Defences.

Healing:
Healing is a similar process to salvaging Traps. Rather than troops being killed in battle instantly, there is a chance some can end up wounded and in a players Hospital. Wounded Troops can be healed for half the recourses it would cost to train them again from square 1.

Infantry
are very strong vs cavalry, but weak vs Ranged, Infantry & Defences

Ranged
are very strong vs Infantry, but weak vs Cavalry, Ranged & Defences

Cavalry
are very strong vs Ranged, but weak vs Infantry, Cavalry & Defences

Retrieved from "https://gow-fireage.fandom.com/wiki/Wild_Troops?oldid=15327"
Community content is available under CC-BY-SA unless otherwise noted.