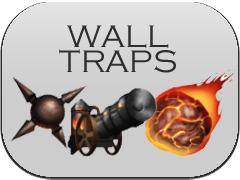 Traps are defensive mechanisms that defend against, and can attack incoming troops. They do so by automatically damaging troops invading troops that attack the players base. Each Trap (With the exception of Tier 3's) are strong against one category of troop, whether that is Infantry Ranged or Cavalry. All cavalry take heavy damage from siege units, as their sole purpose is to lead the battle into the Empire and take out the enemy Traps. As a result, it is essential to have a diverse range of traps, and fairly even numbers of each to even the odds in an attack. Hypothetically, If a player had lots of traps that were strong against Infantry, and an enemy scouted, saw the traps, they could send in all their Cavalry and Ranged units to wipe out the traps.

Building Traps:
Traps can be built one in two ways. The most common way to build Traps is using the Wall building, right between the Urban and Rural area in the players Empire. Tapping the Wall will bring up an interface, similar to that of the Barracks. Here the player can choose whether to build Wall Traps, Strategic Traps or Wild Traps, or to Salvage damaged Traps. This Wall menu can also be accessed by going to the "More" options in the bottom right corner, and tapping "Build Traps".

Salvaging:
Salvaging is a similar process to healing troops. Rather than troops being destroyed instantly like they use to be, they can now be salvaged after a fight, costing half the recourses it would to completely replace them.

How do they differ from Strategic Traps?

Heat Traps
are strong vs Infantry, but weak vs Siege

Tower Traps
are strong vs Ranged, but weak vs Siege

Ground Traps
are strong vs Cavalry, but weak vs Siege


To unlock new traps a user needs to use the academy to research new means of producing stronger traps, as well as upgrading their stats. For the main-category, see units.

Retrieved from "https://gow-fireage.fandom.com/wiki/Wall_Traps?oldid=16682"
Community content is available under CC-BY-SA unless otherwise noted.