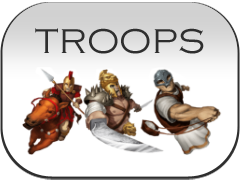 Troops are what makes up a user's army, and can be produced by spending resources in a barracks. There are currently three categories of troops, Troops, Strategic Troops and Wild Troops, each with their own unique abilities and uses. Unlike the other categories of Troops, standard troops are stronger against more types of enemy Troops.

How do they differ from Strategic Troops?

Healing:
Healing is a similar process to salvaging Traps. Rather than troops being killed in battle instantly, there is a chance some can end up wounded and in a players Hospital. Wounded Troops can be healed for half the resources it would cost to train them again from square one.

Tips:
For much of a players in-game experience, Troops will never stand a chance at defense, for many people who attack are level 21 with many boosts and additional advantages. When offline, and a players troops are inside their stronghold, they are vulnerable to attack, and can easily be lost. It is recommended that players station their troops inside an allied stronghold that is shielded (Reinforcing them), or "ghost Rallying".

If a player wishes to attack an enemy empire, they should ensure the enemy they plan on attacking is lower a level than themselves, or all of their troops could be instantly lost. For an extra precaution, it is recommended to send a scout ahead of the battle, to scout out how many troops and traps the enemy has, and to plan the attack accordingly by selecting specific amounts and types of troops.

Infantry
are strong vs cavalry & Siege, but weak vs Ranged & Defences

Ranged
are strong vs Infantry & Siege, but weak vs Cavalry & Defences

Cavalry
are strong vs Ranged & Siege, but weak vs Infantry & Defences

Siege
are strong vs Wall Traps, but weak vs Ranged, Infantry and Cavalry.

Retrieved from "https://gow-fireage.fandom.com/wiki/Troops?oldid=17056"
Community content is available under CC-BY-SA unless otherwise noted.