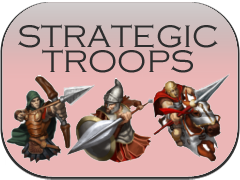 Strategic Troops are very similar to standard troops, however they differentiate in the way a user initiates them and uses them in the game. Strategic troops have slightly different advantages and disadvantages to their regular counterparts. Unlike standard troops, strategic troops mainly focus on one specific enemy type, and do much more damage to that one particular troop. There is also currently no strategic version of a siege unit.

How do they differ from Regular Troops?

Healing:
Healing is a similar process to salvaging Traps. Rather than troops being killed in battle instantly, there is a chance some can end up wounded and in a players Hospital. Wounded Troops can be healed for half the recourses it would cost to train them again from square 1.

Infantry
are very strong vs cavalry, but weak vs Ranged, Infantry & Defences

Ranged
are very strong vs Infantry, but weak vs Cavalry, Ranged & Defences

Cavalry
are very strong vs Ranged, but weak vs Infantry, Cavalry & Defences

Retrieved from "https://gow-fireage.fandom.com/wiki/Strategic_Troops?oldid=15438"
Community content is available under CC-BY-SA unless otherwise noted.